This summer I again made my way down to Whistling Gardens, Canada’s newest botanical garden. Located just south of Brantford, it’s the creation of former outdoor education teacher and tree propagator, Darren Heimbecker. 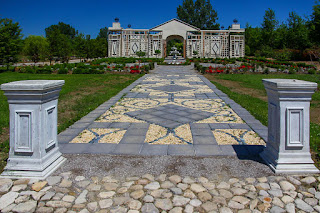 After visiting many of the finest botanical gardens in Europe, Darren was inspired to create his own, practically on our doorstep. Nine years ago he bought a farm which up until four years ago was still growing corn. He then began converting the land from agriculture to horticulture. He readily admits it was an immense challenge and a struggle at times, but this unassuming man fulfilled what many would consider the wildest of dreams.

This is only the second year the gardens have been open and word is already spreading rapidly about this unique property. Currently, eighteen acres are cultivated and now contain the largest public collection of conifers in the world. Over 2,400 species, hybrids and cultivars are planted and thriving. Ideally situated within the Carolinian forest region of the province, the garden is perfectly suited for growing unique species, some among the rarest in the world.

Among them is Abies beshanzuensis, a fir tree that was only discovered in 1963 in China. Today, only three survive in the wild, although a limited number have since been propagated. Another unusual tree, a larch from Japan — Larix kaempferi ‘Diana’, has branches that twist and contort as it grows. Pine trees from Mexico, a variegated oak from Britain, there’s a whole forest of fascinating trees. 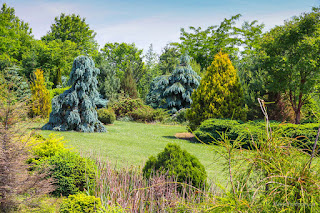 In the rock garden, with the 2,000 or so bulbs that flower there in spring, including a blue river of grape hyacinths, there is a collection of dwarf conifers that are more suited to the suburban garden than the potential giants planted around the property. The rock garden features equally rare perennials, including Dianthus freynii, the first one I’ve seen. It’s the smallest of pinks with tiny leaves that form a mossy, tufted mound that invites you to reach out and pet it.

The rock garden, with a section dedicated to fossils found locally, is just part of the landscape. Did I mention the hundreds of varieties among the 3,000 perennials? The huge clumps of Asiatic lilies, unsullied by the pesky red lily beetle, were prominent. Complementing the perennials, Darren manages to slip in 5,000 annuals to add to the show.

Besides the conifers, Darren’s collection of deciduous trees is on the increase with 40 varieties of Cornus (dogwood) and thirty, yes thirty magnolias. A new addition is Acer capillipes, the snake bark maple with its strangely patterned bark. This, like other introductions are undergoing evaluation as they are being grown for the first time in Canada. 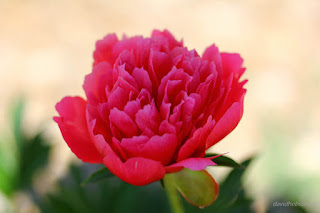 At every turn there is something unique to see. Almost four kilometers of pathways take in the Temple Garden where wedding ceremonies are held, and a fountain amphitheater where over 100 jets of water perform to music (composed by Darren). Water features abound and include a lake with swans, a hidden pond, and a Marsh Garden based on one that existed at Versailles.

A garden on this scale and with this number of plants requires multiple visits throughout all seasons to see different plants at their best. In many ways it is a work in progress and it will be years before some of the tree specimens reach their full potential, but what a place to see now and witness the birth of one man’s dream. Learn more at: http://www.whistlinggardens.ca/
First published July 2013 Waterloo Region Record and Guelph Mercury
Posted by David Hobson