I finally had the opportunity to attend the Hampton Court Palace Flower Show back in July. I’ve been to the Chelsea Flower Show a number of times with groups, but never Hampton, so this time I took the opportunity while visiting family in the UK in Yorkshire to zip down the motorway to London for the show. Given the traffic jams the show generates, the zip kept sticking, but thanks to a 4:00 AM start, my daughter and I made it for opening time.

Up at 4:00 AM to see flowers? Yes, but these shows, despite the name, are about much more than flowers. They’re like Mecca for gardeners, top of countless bucket lists. They feature gardens designed by the world’s best, the very latest in new plant introductions, and more garden paraphernalia to purchase (including buckets) than one could possibly imagine.

The shows, both presented by the Royal Horticultural Society, are similar in content though held at different times of year — Chelsea in spring and Hampton in summer — which means the floral content differs, and at 25 acres (10 hectares), Hampton covers an area more than twice the size of Chelsea. The latter is in the heart of London where it’s easier to access by public transportation, and with a capped attendance it does seem easier to get around. Due to the sprawling nature of Hampton and the afternoon crowds streaming in, we did leave uncertain that we’d seen absolutely everything, but did see plenty. 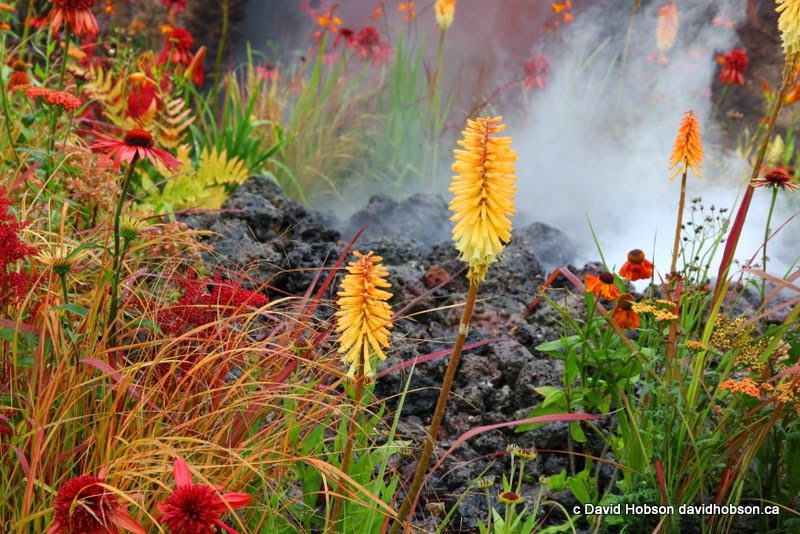 As expected, the display gardens were immaculate; colours divinely coordinated in the most surprising combinations that looked perfectly matched. Never again will I say two particular colours don’t look well together. One group of gardens used colour effectively to interpret a specific theme, that of the seven deadly sins. The theme of anger was indeed blazing mad with Japanese blood grass, the grass interplanted with reds and oranges of yarrow and echinacea pierced by golden spikes of kniphofia, all in a bed of smoking lava.

Gluttony was amusingly represented by giant food cans used as planters, the sardine can appropriately a water garden. The concept for envy was depicted by a grassy meadow in shades of brown. On a mound in the centre, enclosed by a screen of green Perspex, a lawn of artificial grass clipped to perfection — the grass is always greener . . . 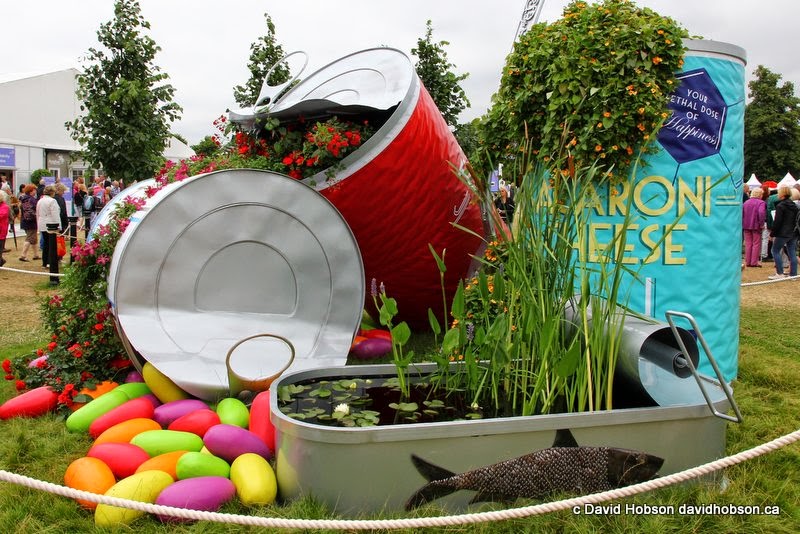 These were the conceptual gardens while others were categorized as summer gardens, large show gardens (Australia took a gold), and smaller ones described as your garden, your budget. These modest gardens were designed to demonstrate how a high quality garden can be achieved on a budget; the budgets for these ranging, ahem, from twelve to twenty-five thousand dollars. I may never look at a cell pack of annuals the same way.

Those attending the show with a far less restrictive budget than me had plenty of opportunity to spend wildly. I was tempted, but had to pass on the giant bronze statue of a snail and the huge stone horse trough planter due to my flight baggage limit. I left the show with only a freebie packet of seed (Ammi majus). 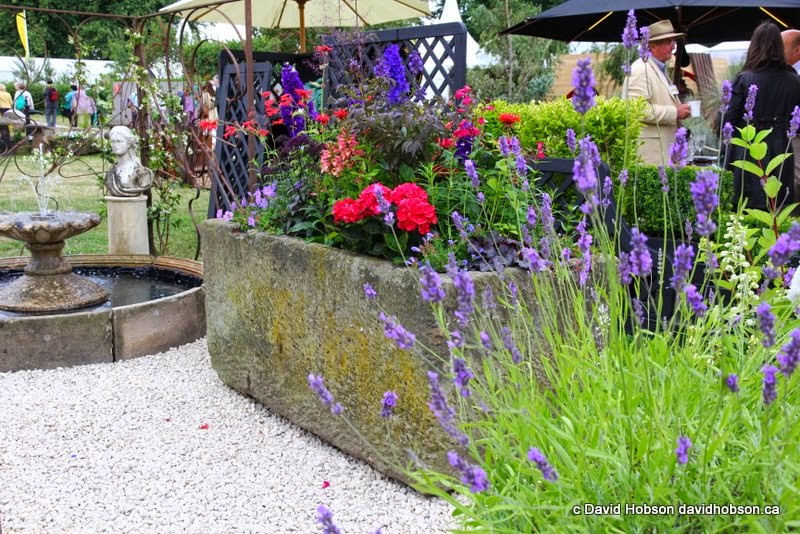 Beyond the gardens and market place of the show, there were wonderful learning opportunities. A number of plant societies were present offering their specialized knowledge, while a display by the RHS called the invisible garden contained a number of interactive displays with microscopes. It encouraged visitors to discover the fascinating unseen world of insects, fungi and the myriad of other creatures that are invisible, yet so essential to a garden.

There was so much to see and so little time as the zippy motorway home awaited us. It was worth the drive.
First published July 2014 Waterloo Region Record and Guelph Mercury
Posted by David Hobson