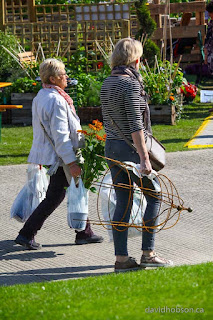 They came with their bags and boxes, wagons and wheelies, all prepared to haul home the perfect plant, piece of statuary or garden accessory. This was the Harrogate Autumn Flower Show, three days in September in the North of England where gardeners have the final opportunity to satiate their garden needs before the season ends. Whether it’s the latest pruning tool, antique planter or the rarest of shrubs, it’s all available — in spades (groan). There was even a plant and product crèche for the temporary deposit of heavy purchases rather than lugging them around the show.

Unlike the well-known city garden shows of summer — Chelsea and Hampton Court — with their elaborate, hugely expensive show gardens; this was brass tacks, no guff gardening. I was there to see it all on a perfect sunny day in the greenest of rolling countryside in Yorkshire. With a brass band playing and my favourite traditional food available, I was at home. Okay, I’m a tad biased having grown up there and I was lucky it wasn’t raining, but I thoroughly enjoyed the experience.

Besides the essential shopping aspect of the show, it is the place to view displays of: the longest carrots, beets the size of cabbages, cabbages the size of pumpkins, and every possible variety of perfect apples. 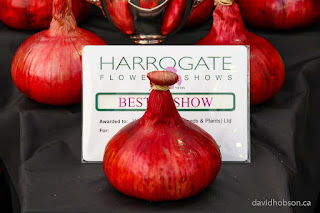 As for the flowers, I gaped at absolutely immaculate specimens of delightful dahlias, mini mums and monster mums, the finest of fuchsias, and don’t even ask about the roses. Glads and bonsai, geraniums and delphiniums, all were challenging for best in class, the result of months of intensive care by amateur gardeners in countless tiny backyards and allotments (community gardens).

Plants for sale were in abundance, and at the right time for planting in the garden. I saw a few that I would have liked to bring home, but alas, customs restrictions are still in place for the importing of plants. Instead I settled for a selfie with a new coreopsis, one that I’ll be on the lookout for over here. 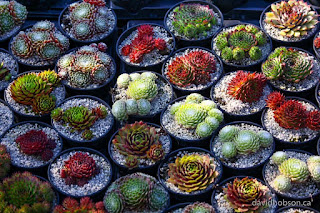 Fascinating were the novel approaches to garden adornments — a life-size shire horse constructed with strips of branches shorn of bark — imagine that galloping across the rose garden. Increasingly popular are vintage stone troughs, originally hand hewn with hammer and chisel. My dad had a collection filled with alpine plants.

Once used to capture water or as troughs for animal feed on hill farms where stone was abundant, the old ones are rare and much sought after, but now they can be reproduced by mechanical means. Since the stone is the same, it’s hard to see any difference between those and the traditional ones. Galvanised planters appear popular too, just as they are around my place. One dealer appeared to have rounded up every possible metal artifact that could possibly hold soil, the original function of some hard to discern. 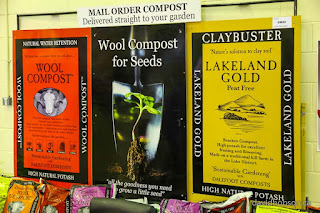 There is much tradition around gardening in Britain; though one that is fading is the use of peat in the garden. The government proposes to ban the use of peat based products by 2020 as harvesting it is considered environmentally unsustainable. The Royal Horticultural Society has already reduced the use of peat in its own gardens by 90%.

There are alternatives and I spotted a couple of peat free potting soils — one produced from composted wool and the other from composted bracken. The latter is produced in the Lake District and aptly named Lakeland Gold. Of note is they were both labelled as compost, the term used in Britain for potting soil, not to be confused with compost produced by a compost pile.

This short glimpse into to the heart of British gardening was delightful, but now it’s time to sort out my own garden. It doesn’t handle neglect well at all.
First published October 2015 Waterloo Region Record and Guelph Mercury