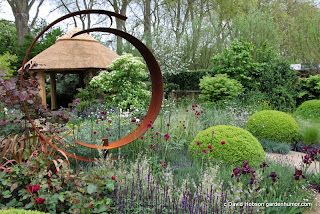 It's all about timing. My trip to the Chelsea Flower Show and gardens in the UK this year occurred after that country experienced the coldest spring in fifty years, and yet rhododendrons and azaleas were in full, glorious bloom coinciding with my visit.

The effect of this exceptionally late spring wasn't apparent at the Chelsea Flower Show where, on the one hundredth anniversary of the event, the show gardens were as jaw dropping as ever. Organisers and participants have long ago mastered the challenges of ensuring plants and flowers are at their immaculate best for the five days of the show. It’s not unknown to use a hair dryer to encourage a tardy poppy to bloom. No doubt plants would be broiled or braised if necessary to achieve horticultural perfection. 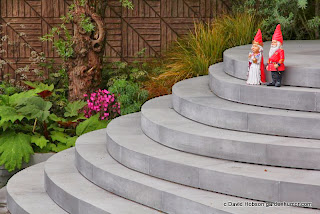 Much was made in the media this year about the decision to allow garden gnomes a presence, having been previously banned. I expected to see hordes of the little fellas, but no, I only spotted two, and these were in the garden designed by Prince Harry and prominent landscape architect Jenny Bloom. The garden, a representation of a Lesotho village, was created to promote Prince Harry’s African Aids Orphans charity and in memory of his mother Princess Diana.

Of course, with the range of eccentric characters one sees at the show, first event of the social season in Britain, gnomes could easily have blended in with the crowds, and there were crowds. The five day show was sold out as usual with tickets online going for hundreds of dollars. Despite the number of visitors, it does not detract from the experience as this is not a rock concert crowd but a gathering of enthusiastic plant and garden lovers from around the world, full of enthusiasm and good will. No pushing or shoving, even politer than Canadians are reputed to be.

Another highlight was my first visit to Great Dixter, home and garden of the late Christopher Lloyd. Lloyd, revered by gardeners worldwide was a preeminent plantsman, garden writer, and television personality. 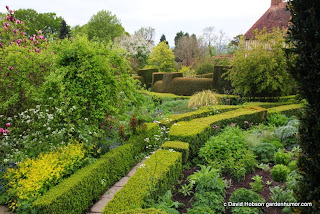 Now operated as a private trust with an educational mandate, this rambling yet cleverly structured garden was originally designed by renowned architect Sir Edwin Lutyens for Lloyd’s parents, Nathaniel and Daisy, after they acquired the fifteenth century house in 1909. It is as glorious as ever, though it has never remained static. Lloyd learned gardening skills from his mother, then boldly modified and enhanced many aspects of the garden in the thirty years following Daisy’s death in 1972. After Lloyd’s death in 2006, head gardener, Fergus Garret, has continued to care for the garden. 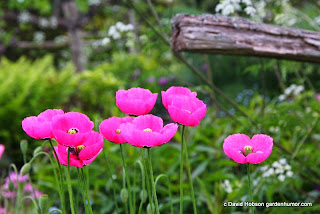 He experimented boldly, creating unique combinations of colour and form. I saw bright crimson tulips soar through swaths of blue forget-me-knots, masses of cow parsley (yes that weed) tempering the kaleidoscopic springtime blaze of poppies, euphorbia, wallflowers, and bluebells. Soft and low boxwood hedges combine with huge ones of yew to form an erratic maze of delights connecting the many sections, or garden rooms, while giant topiary mounds topped by figures of birds, stand like sentinels. Known for his succession planting schemes that ensured colour throughout all seasons, the shrubs, climbers, perennials, annuals, and biennials in beds and mixed borders ensure something is always exploding into bloom. 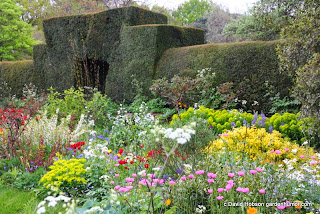 Lloyd certainly had the eye of an artist, or it could be easy to believe he simply wandered about wearing an old jacket, countless seeds carelessly spilling from the holes in his pockets, accidentally creating heavenly vistas.
No matter the timing, there are always so many amazing plants to see in Britain. Meanwhile,


I’m back in my own garden, trying to sort the plants from the weeds that took advantage of my absence — bad timing!
First published June 2013 Waterloo Region Record and Guelph Mercury
Posted by David Hobson