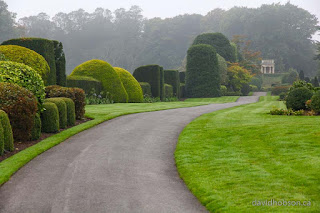 On a cold January day, I find myself reminiscing about a garden I visited, where for a while I stepped back into the nineteenth century. It began when I came upon Victorian croquet players dressed in traditional white. Like ghosts, they began to emerge in soft focus from a light morning mist. This was last fall whilst visiting Brodsworth Hall near Doncaster in south Yorkshire. Both house and garden are remarkable, though not so well-known as those on the well-travelled tourist route in the south of England.

Brodsworth was built in the 1860s and has a curious history with a plotline well suited to the Downton Abbey saga. The original estate was owned by the Wentworth family until sold in 1790 to Peter Thellusson, a director of the Bank of England. When he died in 1797, his will stipulated, without explanation, that his fortune was to be held in trust for three generations, the eventual beneficiary being Charles Sabine Augustus Thellusson, a great-grandson. 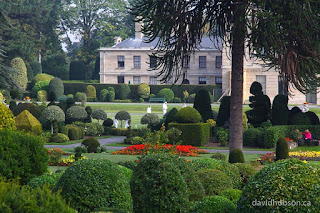 Wealthy Charles immediately demolished the original Georgian house and built a modern Victorian mansion complete with marvelous gardens. It stayed in the family relatively unchanged until 1990 when the estate was acquired by English Heritage, an organisation that manages historic sites. Today the house and gardens are a unique time capsule of Victorian style.

The 6 hectares (15 acres) of gardens suffered neglect for a period after WWII, but have since been restored to their original Italianate-like 1860s design, popularised in Britain after Victorians returned from grand tours of Europe. 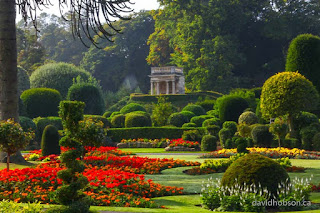 Around the imposing, grey limestone house are spacious lawns, which were said to have been mown in earlier days by machines towed by ponies wearing special leather shoes to prevent damage to the lawns.

From a marble terrace I watched the croquet players at their game, surrounded by formal flowerbeds filled mainly with annual bedding plants. These are meticulously maintained and replanted as many as four times throughout the seasons. In September they glowed brightly with red salvia and yellow marigolds.

Hundreds of densely planted evergreens completed the vista — holly, laurel, and yew. Every single one perfectly sculpted into simple, random mounds and columns with the occasional precise geometric shape. Beyond the extensive topiary stands a backdrop of mature trees — massive pines, cedar, beech, and the unusual Chilean pine called the monkey puzzle tree. Many of these would have been planted long before the current garden was developed. Everywhere, classical statues, fountains and urns, in marble or stone, graced the pathways. 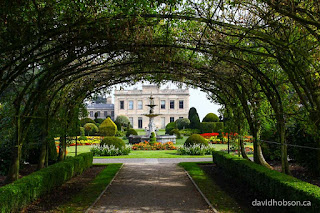 I followed one meandering trail that led me to the renowned grotto and its river of white gravel bounded by alpine plants. Masses of ferns grow on the steep, rocky sides, including palm-like Dicksonia tree ferns. Winding paths led me through short tunnels and over bridges, the parapets bordered by loops of iron chain draped with rambling plants. Each stop provided a different vantage point to pause and admire the ingenuity.

Nearby I wandered into a pet cemetery where I spent a few quiet moments among small headstones, each one etched with the name of a treasured friend — Dash 1895, Spot 1906, Tatters 1919. 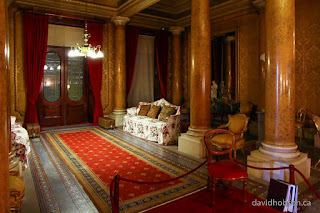 I then climbed a small hill past an ivy covered summer house, to a lookout from where, with the mist risen, I could see even more of the gardens inviting my exploration.

From the hill I made my way down into the still fragrant wild rose dell, through the walled garden, then followed the woodland pathways for a while with only the clunk of a distant croquet mallet to disturb the glorious silence of this nineteenth century garden.

It was a lovely day, but sadly, dreaming is over now as all I hear is a twenty first century snow plow coming down the street.
First published January 2016 Waterloo Region Record and Guelph Mercury