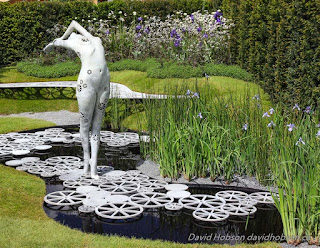 Look, there are the newlyweds, Rupert Murdock and Jerry Hall, checking out the David Austin rose display! Wait, is that Piers Morgan? No, Peirs, you can’t take a selfie with me; I’m much more interested in the latest plant introductions.

It was press day at the Chelsea Flower Show and lucky me had my coveted press accreditation, allowing me to preview the show prior to opening to the public. This is the one day when there are no crowds. Plants and show gardens can be viewed at leisure, apart from a little jostling with dignitaries or celebrities like old Piers. The Queen also attends, but we lesser mortals were cleared out before she arrived.

To see the latest plant introductions immaculately displayed in the 1.2 hectare (three acre) Grand Pavilion and the ultimate in garden design outdoors is a jaw dropping experience for all who attend. This year there were seventeen large show gardens and thirteen smaller ones, each one a different concept created by designers with impeccable credentials. All compete for a coveted gold medal, awarded by the Royal Horticultural Society for meeting almost unattainably high standards. 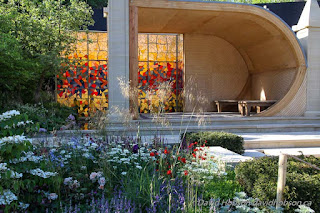 Beyond gold is the most prestigious honour of all — Best in Show. It was won this year by Andy Sturgeon for his Jurassic-inspired garden sponsored by the Daily Telegraph newspaper. The garden, focusing on how gardens may have to adapt to their environment and a changing climate, took ten months to design and used 80 tonnes of stone and plants from Spain, France, and Italy.

Perhaps equaling the honor of Best in Show is the People’s Choice Award, decided in a vote by the general public. It went to ‘God’s Own County — a Garden for Yorkshire’. Inspired by the magnificent medieval East Window at York Minster, it was characterized by a huge panel of stained glass made using the same techniques of the original window in 1405. The design of the window was then echoed in shape and form in the garden below.

At first glance, all the gardens can be viewed as presented — to be simply admired or inspired. They are an outdoor gallery of living art that can, like any art form, elicit a range of emotions. Sometimes the concepts are clear, in others less so. ‘The Modern Slavery Garden’ with its brightly coloured front doors placed at random had a contemporary look, yet the designer used the doors to symbolize entry into a hidden world where people still work in captivity. 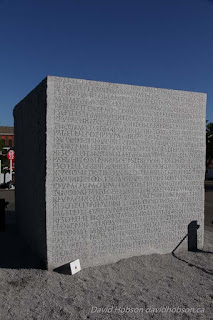 There was no question or need to interpret the garden that greeted visitors at the entrance to the show. No gold medal this time around for designer Diarmuid Gavin of Ireland, a regular at the show who likes to shake up the judges with his surprising creations. The gardens at Chelsea may be living art, but this one was truly alive.

As a group of musicians played the tune In an English Country Garden, in what appeared to be just that, the garden came alive as conical hornbeam trees began rotating, boxwood globes rose up slowly then lowered as a border of plants like a circus caravan circled a small cottage. Meanwhile a pair of window boxes ascended the wall of the cottage. Sponsored by Harrods department store, this was the British Eccentrics Garden. Okay, I thought, I thoroughly enjoyed that, but there’ll be some who’ll think Diarmuid jumped the shark this year.

At the completely opposite end of the ostentatious scale was a garden that I could have easily passed by. Before what I took to be a large sculpture, people were standing or crouched as though praying. This was ‘The Antithesis of Sarcophagi’ a 44 tonne granite cube enclosing a small garden, a garden that could only be viewed by peeping through small holes drilled through the walls. Soon there was a line of peeping people, and at Chelsea, people watching is almost as much fun. 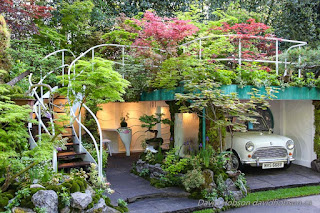 If I had to choose a favourite among all the gardens, it would be the ‘Garage Garden’ a gold medal winner by Japanese designer, Kazayuki Ishihara, who is as colourful as his garden. Lushly planted, it was an odd combination of a two tier structure housing an antique car, space for an office, and a roof top garden reached by a winding stair. Surprisingly it fused all these elements into a “wish I lived there moment”.

In fact, I wish I lived next door to the Chelsea Flower Show and could visit every day as there is simply too much to see, eleven acres of a plant and garden extravaganza to delight humble gardeners like me and Piers Morgan.
More show images here. More Chelsea here. Hampton Court Flower Show here